What are the Bengali Wedding Rituals? 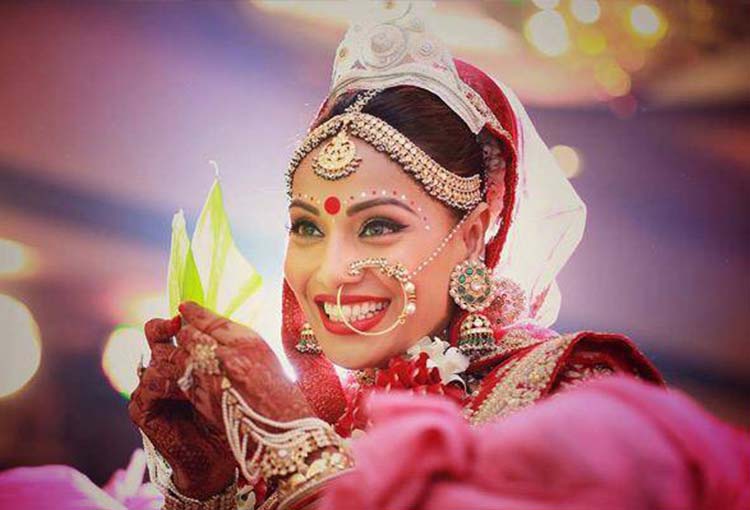 India being the land of diverse cultures offers too much exciting things when it comes to the wedding. Every area’s wedding customs vary from each other which makes them unique and interesting at the same time. Though basic Hindu wedding rituals remain the same, still there are so many fun wedding ceremonies that make them different from each other. Amongst them, Bengali weddings are one of the most colourful ceremonies in India. If you were lucky to attend a Bengali wedding then you would surely agree that they are a visual delight.

Bengali Hindu weddings are full of colour and vivacity. As compared to Punjabi Weddings, they are not that opulent but they are very much Bengali weddings usually are not opulent but you will be witnessing elaborate preparations to perform the many rituals with precision. In some cases, these weddings are also very much physically demanding. 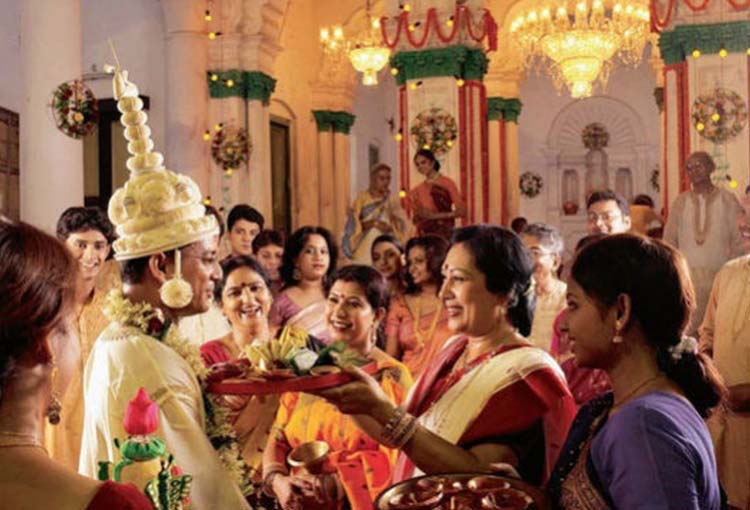 In Bengali Hindu weddings there is a specific time frame know as ‘lagna’ that is considered to be the most auspicious period in which the wedding ceremony can take place. The wedding procession is led by the groom who leaves for the ceremony in some luxury caravan which is dispatched by the bride’s family. This group is called the ‘bor jatri’. During this, a car is also sent separately for the groom that leads the whole caravan.

Just like every Indian wedding the bride’s family receives the groom and their family at the entrance of the wedding venue. In some weddings, the mother of the bride also washes the wheels of the car in which the groom arrives at the wedding. At the entrance, the groom is anointed with tilak from the baran dala and also an arti is done does to welcome him. All the guests with the groom are also welcomed with warmth and then seated as well as served with refreshments. 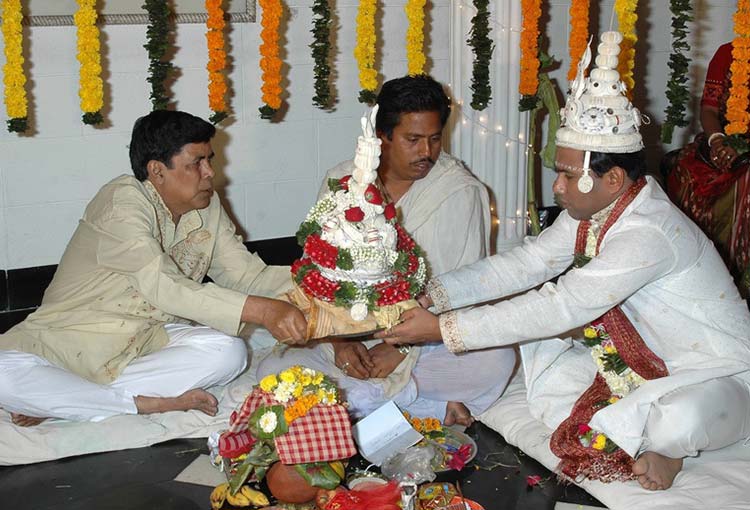 The groom at Bengali wedding don traditional Bengali attire which is dhoti and kurta. The groom is made to sit at the chchadnatala which is basically the sanctum sanctorum of the mandap to take part in all the rites. Here, the maternal uncle of the bride, who would also be doing the ‘kanya sampradan’ later, gifts the groom new clothes which he has to wear during the wedding rituals. These clothes are known as ‘potto bostro’. 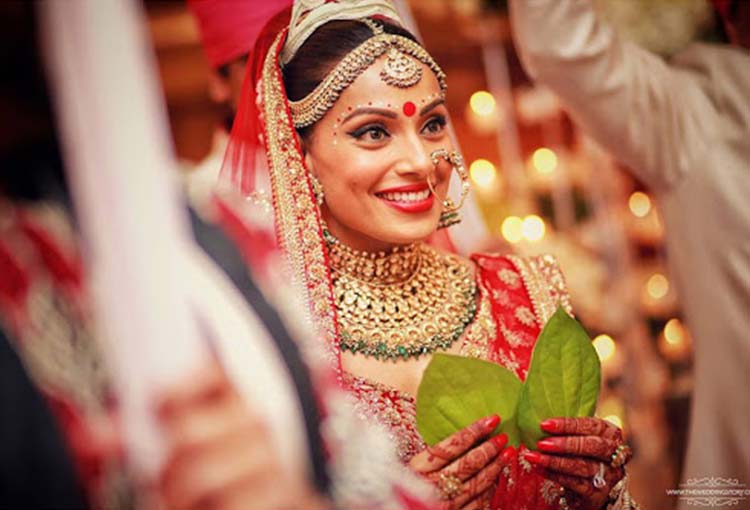 After the groom’s rituals, the bride enters the ‘mandap’ where the groom is already seated along with the priests as well as the family. The bride enters with her brothers seating on a wooden stool also known as a pidi.  The bride’s brothers, as well as close male relatives, then lift the bride seated on that stool and carry her around the groom, who is seated in front of the wedding pyre, seven times in a row.

During all this, the bride covers her eyes with betel leaves. After some time the bride sets her eyes on the groom to see him amidst the blowing of conch shells and ululation.  This ceremony is known as subho drishti. All this happens in the presence of the elders of the two families. 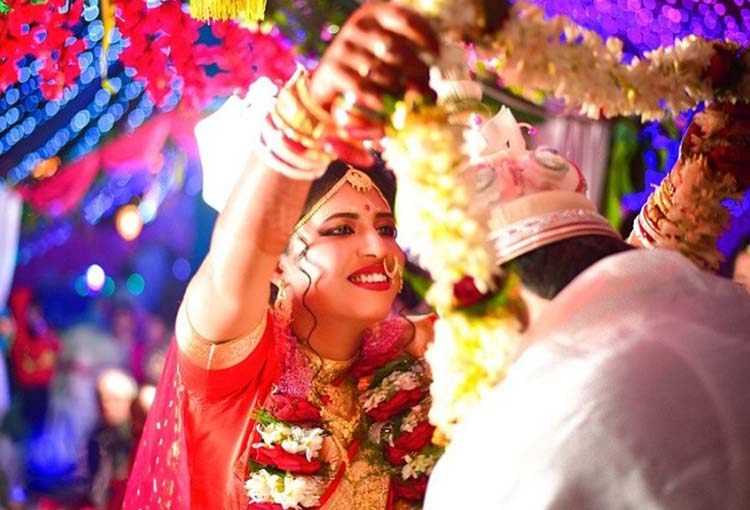 After subho dristi ‘mala badal’ takes place at the Bengali weddings. The bride stays seated on pidi which is held by her brother during this whole time. Then the exchanges of garlands are done with the groom three times which signifies the couple’s acceptance of each other.

In some weddings, this ritual has a fun element when bride’s brothers often try to hoist the bride as high as possible to make it a little difficult for the groom to reach the bride’s neck to while garland exchange. Even the groom’s friends and bothers enter the frame to support the groom. They also try to lift the groom even higher than the bride to make it difficult for her too. This sweet competition between the two sides goes on for a while which makes the assembled guests end up laughing. 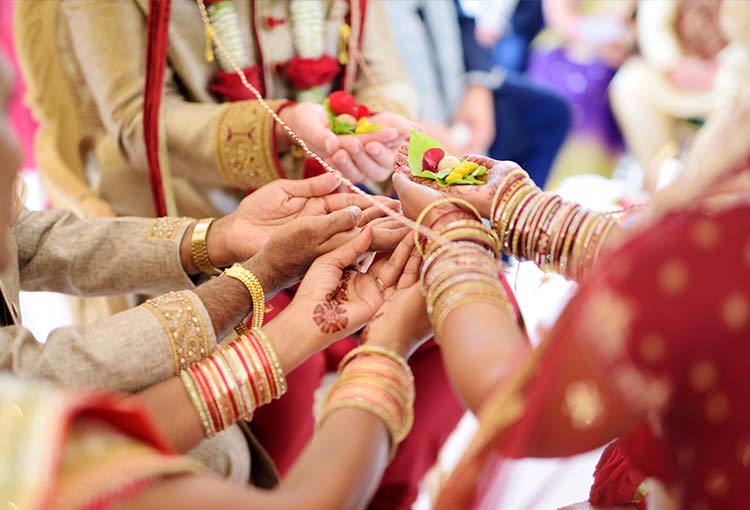 In Sampradan, an elderly member of the bride’s family hands over the bride to the groom. During this ceremony hands of bride and groom are tied with a sacred thread and the hands will stay in bounds till the end of rituals. This ceremony is more specifically known as kanya sampradan.

Yagya and Saat Paak (on foot) 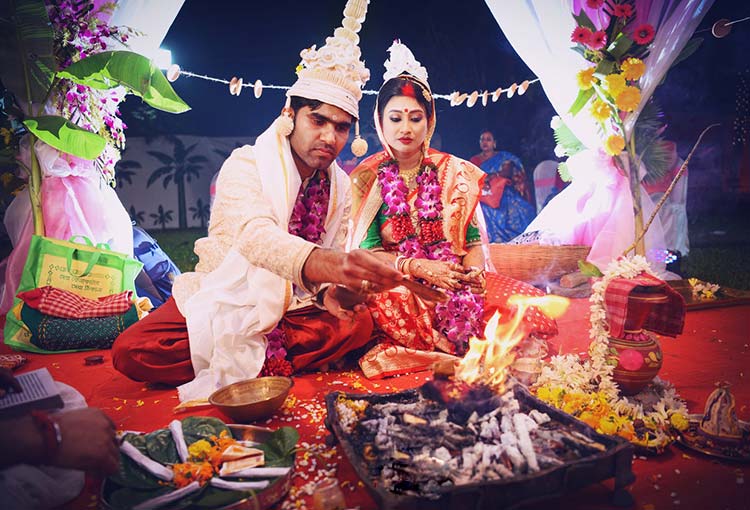 After sampradan, the Vedic rituals are done in the presence of Agnidev to solemnize the marriage, is carried out by the priests. This usually happens in all Hindu weddings. The bride and groom sit along with the priests and the family and follow the instructions carefully.

After a while, the couple-to-be is asked to take 7 rounds along the pyre seven times. During all of this, the groom wears an ‘uttariya’ and the end of the saree worn by the bride are tied in a knot called the  ‘gathbandhan’. The seven rounds taken around the wedding pyre solemnize the wedding and these seven rounds are known as Saat Paak in Bengali weddings. 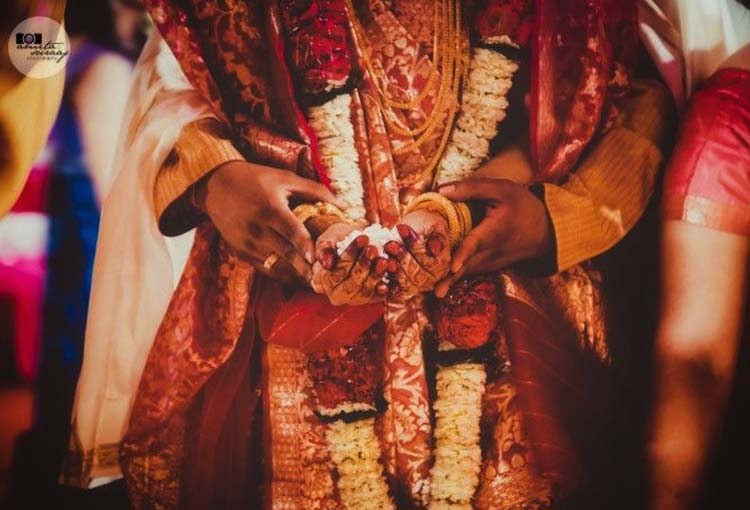 In some of the Bengali weddings, the bride’s brother gives puffed rice or khoi in her hands and the couple then offers it to the holy fire. Whereas in most of the weddings the bride stands in front of the fire with chaff in hand and the groom stands just behind her. The couple’s bodies touch and the grooms have to hold the hands of the bride. The khoi is put on the chaff and by using the concept of winnowing, the khoi is thrown into the fire. This ritual is known as Kusumdinge.

In the Sylheti Bengali weddings, the bride needs to grind the khoi with a pestle, every time her brother hands over khoi before offering it to the fire. 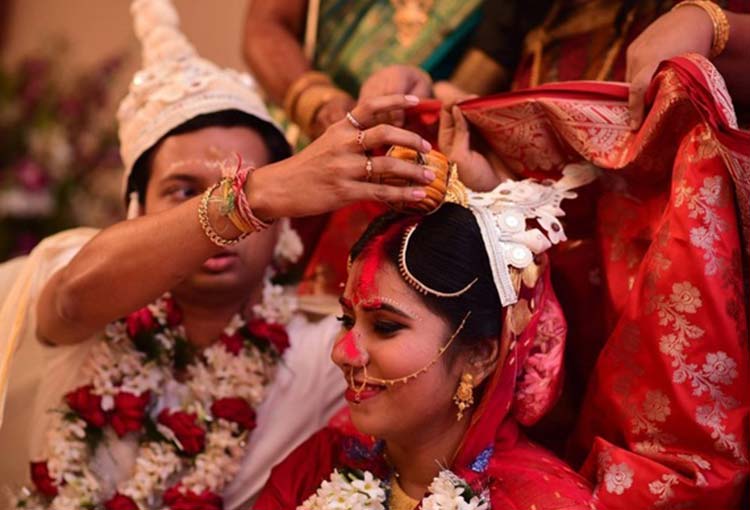 After all this, the groom puts a vermilion or sindoor mark on the bride’s forehead and also uses a new saree as a veil to cover her head.

This marks the end of the wedding rituals and the couple is declared man and wife. 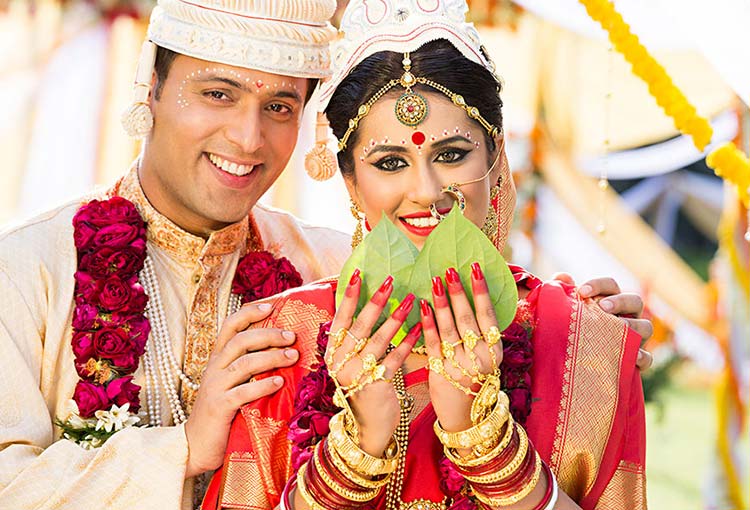 In Bengali wedding, the wedding attire hold so much of importance as these are very different from most of the other Indian wedding attires. The bride as well as the groom dress up in traditional Bengali wedding attire. These wedding dresses are being followed for centuries. The Bengali bride dons the traditional red or any other auspicious coloured authentic Banarasi sari and a Red Cheli (Veil) for her wedding day. She wears a unique, triangular and intricately carved headgear known as Mukut which is made of Shola which is basically a milky white sponge. Just like the bride, the groom also dons a headgear better known as Topor. It is a conical and equally intricately designed headgear which is gifted to him by the bride’s side. He has to wear this headgear during the wedding ceremonies along with his traditional Bengali Dhoti and Kurta. Trust us, a traditional Bengali couple are a gorgeous sight to behold at their weddings!

Besides the Mukut and the Topor as their headgears, the bride and the groom also have to carry two distinct items in their hand during the wedding ceremonies. In which the groom is given the Jaanti, which is a traditional betel nutcracker to hold and on the other hand the while the bride needs to carry the gach kouto which is a red, tall container. She needs to keep in her hand all the time during their marriage vows. In Bengali traditions, these items are considered to be auspicious as well as helpful to ward off bad luck. You should not forget to spot these traditional items at an authentic Bengali wedding. 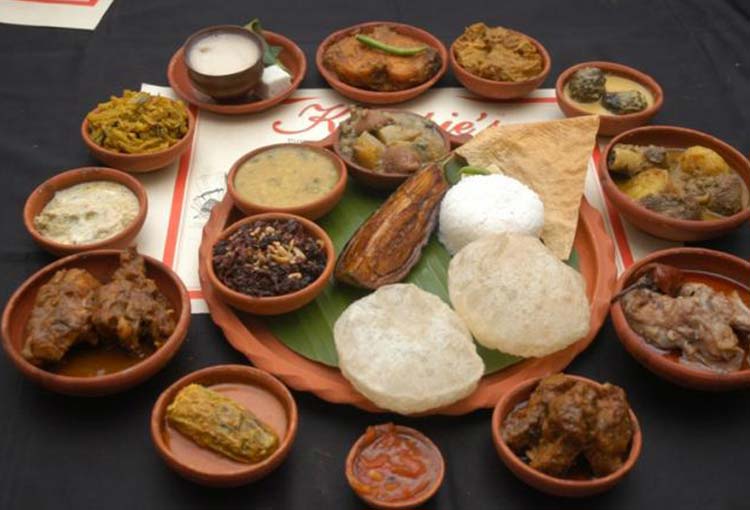 Bengali Weddings are all about lip-smacking delicacies. Plus, if you are a hardcore non-vegetarian then a traditional Bengali wedding will surely be a heaven for you! A Bengali wedding includes an elaborate feast with all the non-vegetarian delicacies. As Bengali wedding rituals take place at night usually, therefore, the wedding feast is a hefty and sumptuous dinner. The menu usually includes rice dishes such as Pulav or ghee bhaat (rice cooked in ghee). There are also various vegetarian dishes, but the number of non-vegetarian dishes made of fish and meat will be more than the vegetarian ones. After the dinner, you can hog on various famous Bengali desserts such as the Mishti doi, rasgoollas, and other sweetmeats. Don’t forget to try the traditional Bengali paan is offered to every guest after the dinner.

Altogether, a Bengali wedding would be fun as well as once-in-a-lifetime experience of unique nuances to look out for.

Hope we were able to shed some light on Bengali wedding rituals and how people of the Bengali community in India get married.