8 Bollywood Actresses who rocked Sabyasachi on their D-Day! 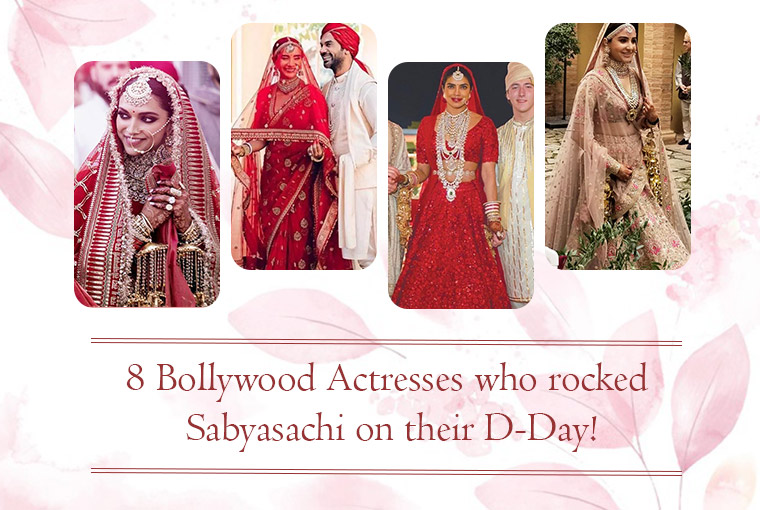 When it comes to donning the bridal lehenga of your dreams, the first name that comes to every mind is Sabyasachi. This amazing Bengali designer has been winning our hearts for ages and every time he designs something unique for Bollywood brides he leaves everyone speechless be it Anushka Sharma, Bipasha Basu, Anushka Sharma, Soha Ali Khan or Sagarika Ghatge. The traditional look of his lehengas blended with modernity makes them a treat for everyone’s eyes. The best part of his outfits is that ethos and soul remain classic but still, you can see some freshness in each and every outfit designed by him.

Here we are with some spellbinding outfits by Sabya pulled by famous Bollywood actresses on their D-day!

Starting with our favourite, Anushka Sharma 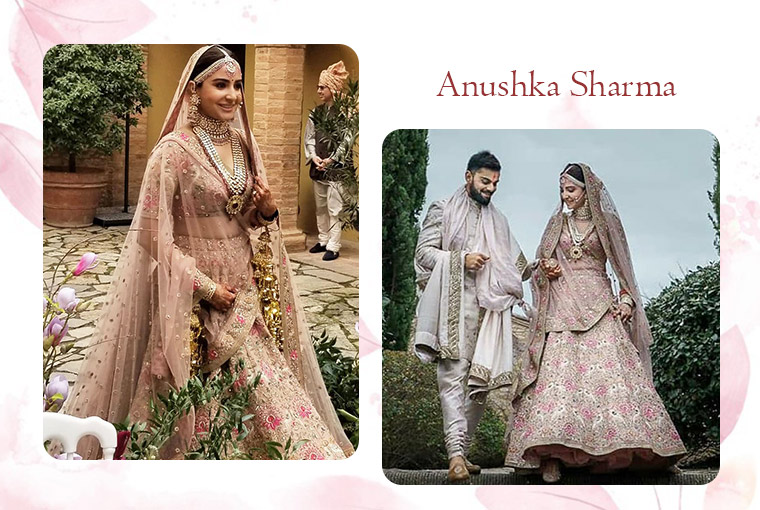 To be honest, we still can’t get over how stunning Anushka Sharma looked at her wedding. Virat and Anushka tied the knot in the month of December in 2017 and she chose to wear a pale pink lehenga with floral motifs designed by Sabyasachi which literally won millions of hearts. Not only that Anushka chose Sabyasachi’s designs for engagement and reception too. 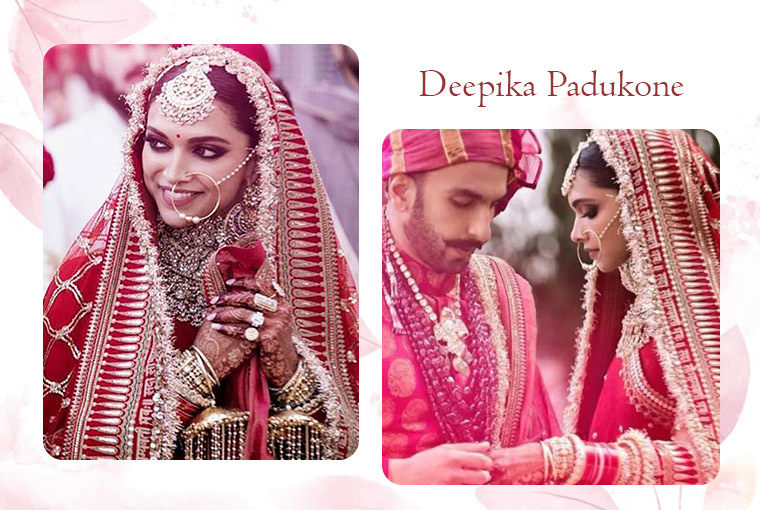 Deepika Padukone has always been a trendsetter and she literally made us swoon with her Sabyasachi ensemble at her wedding with Ranveer Singh at Lake Como, Italy. For her first wedding ceremony as per Konkani rituals, she chose a gold and orange silk saree. For her Anand Karaj, she wore a traditional red coloured heavily embroidered lehenga. The key highlight of her attire was her dupatta that had intricate embroidery on its border, the words ‘Sada Saubhagyawati Bhava’ are also woven on it that made news all over social media. 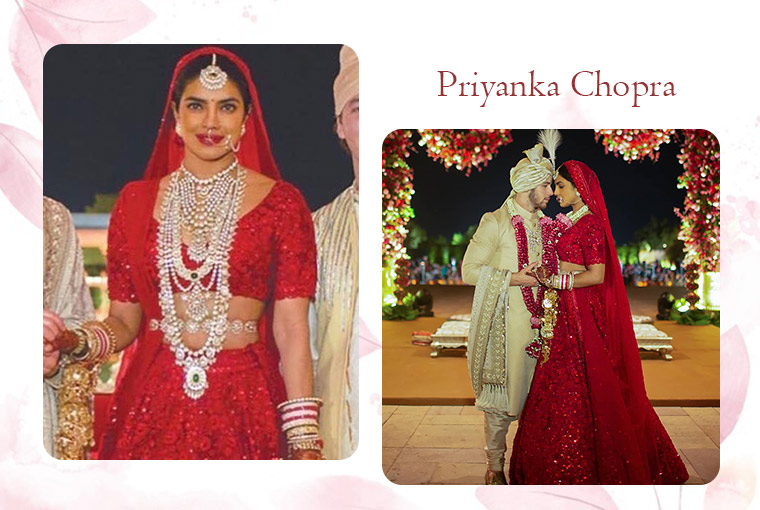 Priyanka Chopra’s red Sabyasachi lehenga may look conventional at first glance, but you would be surprised to know that it took 3,720 hours to be made. Priyanka Chopra’s sindoori red Sabyasachi lehenga took 110 embroiderers from Kolkata a total of 3,720 hours to custom create the piece, which came with a half-sleeved blouse and a ballgown-esque skirt. It was also topped off with delicate hand-cut organza flowers, French knots in silk floss and layers of threadwork which made her look like a queen which she already is! 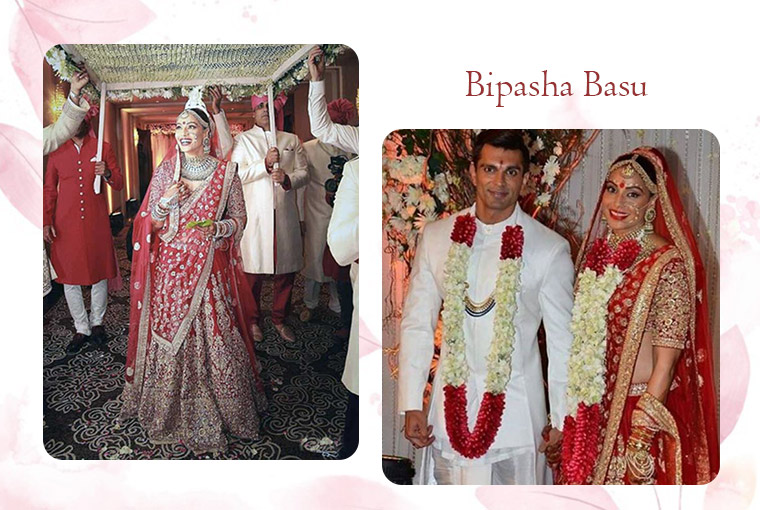 Bipasha Basu looked absolutely beautiful dressed in a red traditional lehenga by Sabyasachi. Her pictures of the Bengali style wedding gave us major wedding goals. Her lehenga was surely the highlight of the wedding! Even without reading the designer’s name, we guessed it was none other than Sabyasachi. That beautiful lehenga really looked good on her athletic body as she carried with so much grace and confidence! 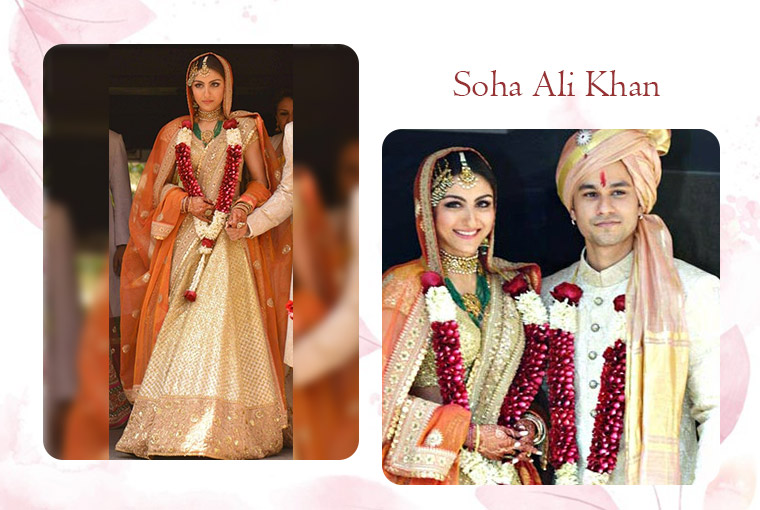 Soha got married to Kunal Khemu in 2015, and she chose Sabya’sshowstopper lehenga from his Opium collection. That lehenga came in ivory and gold, and on Soha’s mother, Sharmila Tagore insisted on adding Kesariya orange, specifically to the lehenga. With the addition of kesariya, that lehenga became an instant rage and it was Sabya’s first bridal lehenga in ivory which has become Sabyasachi classic too. 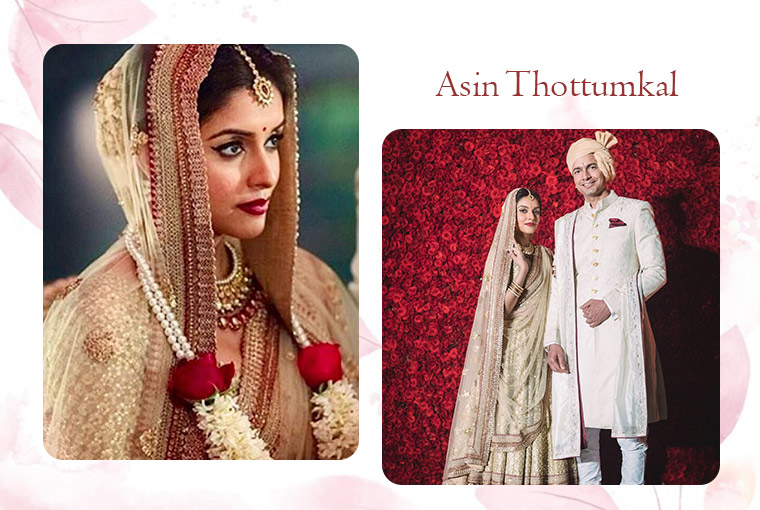 Asin got married to Rahul Sharma in a Christian as well as a Hindu wedding ceremony. For her Hindu wedding, Asin opted for a champagne-gold lehenga adorned by zardosi borders and looked like a dream in it. 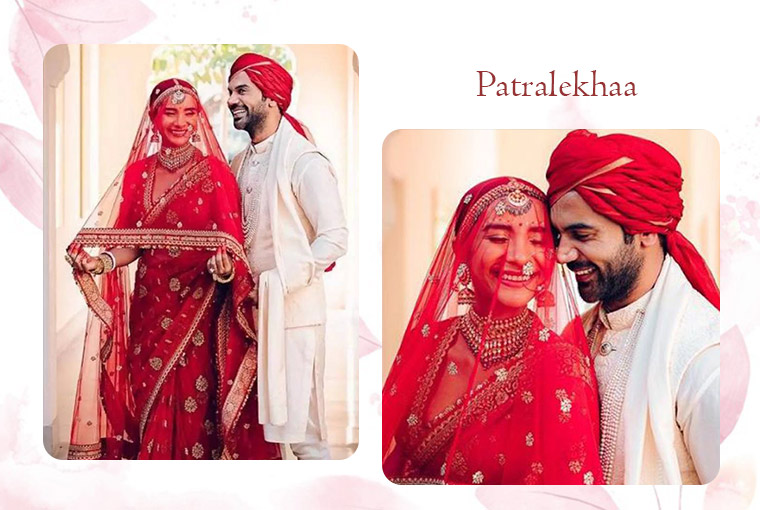 Patralekhaa and Rajkummar Rao recently tied knots and both of them opted for exquisite creations by Sabyasachi Mukherjee for their her wedding. The bride chose a customised red tulle embroidered booti saree with an embroidered veil that had a Bengali verse inscribed, written by the designer for the couple. It read: “Amar poran bhora bhalobasha aami tomay shomorpon korilam” which was certainly the highlight of her wedding attire! 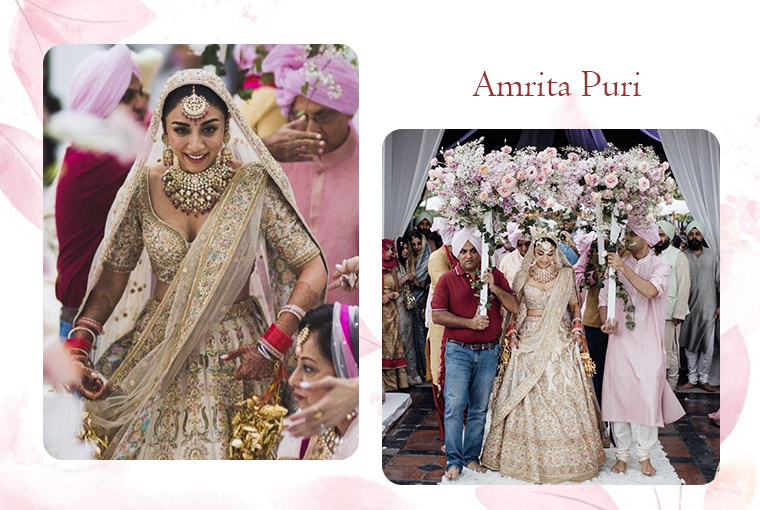 Amrita Puri got married in Thailand with she opted for something fragrant, light yet glamourous complementing the décor of the wedding. She opted for a lehenga from The Udaipur Collection by Sabyasachi. The key highlight of her lehenga is that hundred and eleven colours of silk thread in vintage Persian shades were used to create a decorative base and embellished with bugle beads, hand-cut sequins, crystals and pearls were used to create it! Here Anand Karaj looked nothing short of a fairy tale and the lehenga looked absolutely ravishing on her.

If you are also dreaming of Sabyasachi lehenga at your wedding then you should definitely take inspo from these Bollywood brides!