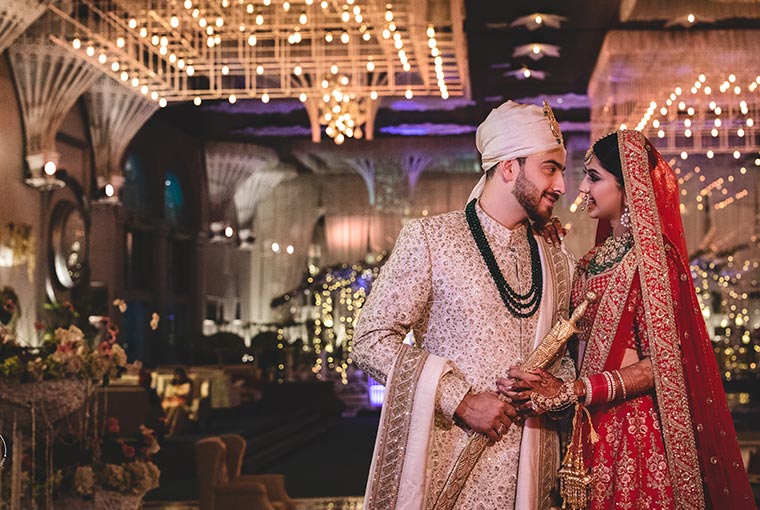 If you always thought about Punjabi Weddings are all about dhol, dance and alcohol then you are clearly mistaken. There are so many Punjabi traditions, customs and rituals that make their Weddings a colourful affair. We have seen that Punjabi weddings are all about colour, fun and delicious food but there are certain things that will surely surprise you with its importance. Here is a combined a list of all the Punjabi wedding traditions as well as rituals so that next time you won’t need to ask the people present there about it…

It’s time to learn about all the Punjabi wedding traditions, in detail. 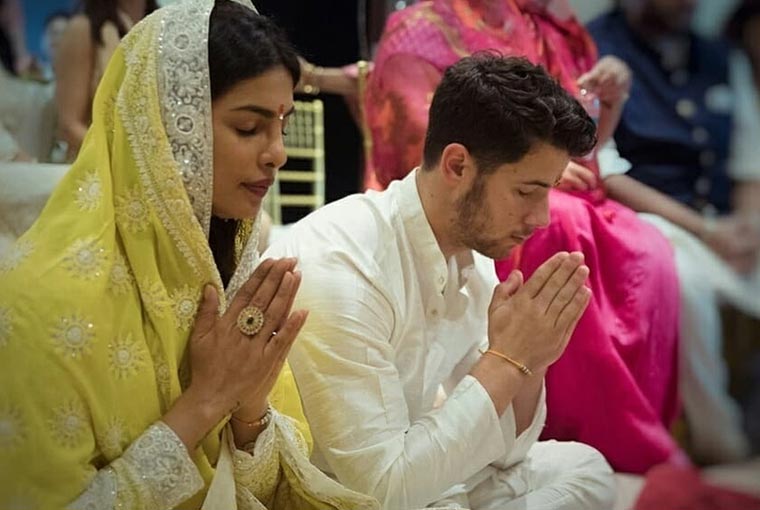 Roka or Thaka is the first ritual of a Punjabi Wedding.  The word Roka came from rokna that means that after that ceremony the bride and groom can stop looking for other wedding prospects. In this ceremony, their alliance gets fixed with their family’s blessings. Both sides of the family come together and exchange traditional gifts, fruits and sweets as a part of the ceremony. It’s basically a small intimate ceremony that officiates the alliance between the couple to be. 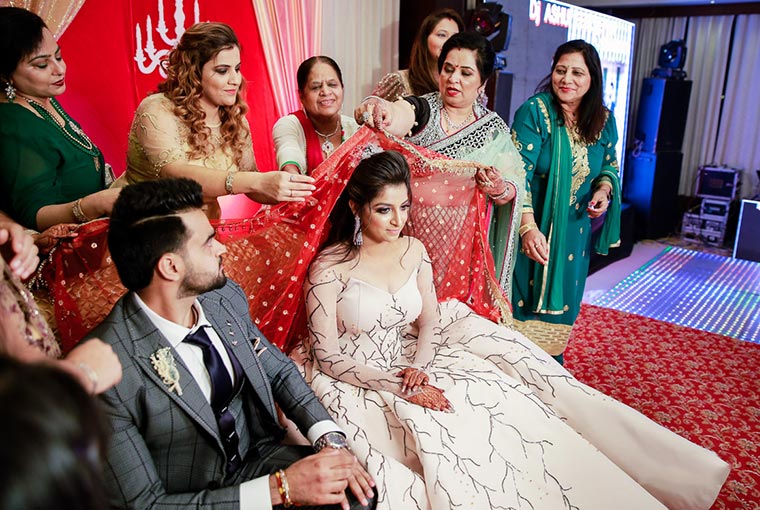 The Chunni Ceremony takes place just before the couple’s engagement. During this ceremony, the groom’s family gifts the bride-to-be with a red or pink Chunni and also make her wear that on her head. It is a symbolic gesture which means the acceptance of the bride-to-be as the daughter-in-law by the groom’s mother. The bride-to-be is also gifted with gifts, jewellery, makeup, sweets and a red-coloured outfit. The ceremony is called chunni chadana in Punjabi. 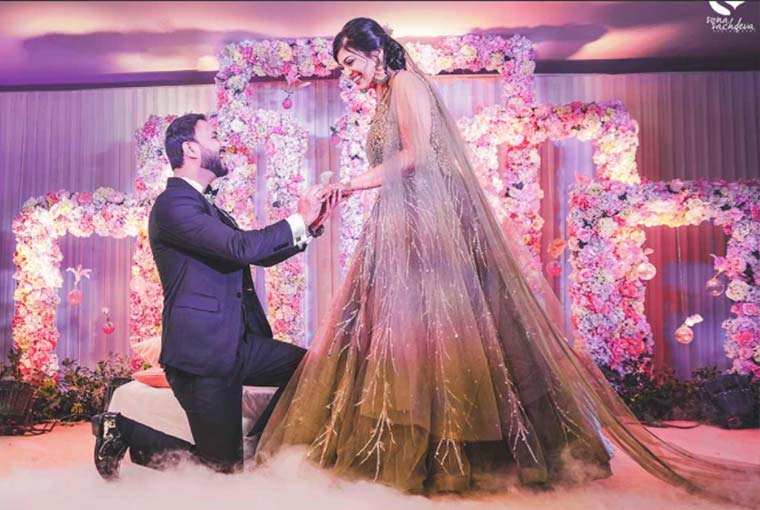 Usually, this ceremony takes place on the same day as the chunni ceremony. There are some Punjabi families want it to be an intimate affair, whereas some people go for a grand celebration by inviting a lot of guests and with all the pomp and show. Just like engagements, the bride and groom exchange rings and gifts are given to the bride and groom. 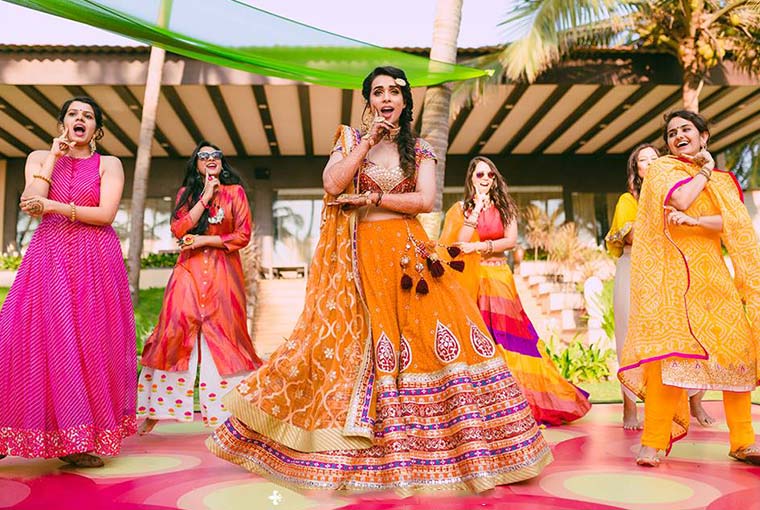 No Punjabi wedding is complete without a fun sangeet function. It is one of the most entertaining as well as the exciting function of all. The best part of this function is that both the bride and the groom’s side rehearse and perform at this function that makes it really entertaining. This ceremony is made more fun where all the family members, friends, relatives and cousins dance together at the Punjabi Tunes. This is the most awaited function which is a spectacular musical evening enjoyed by everyone. You can also check out some amazing Punjabi wedding songs here. Now, even some Delhi NCR Wedding Venues have special sangeet stage setups for the performances at this function. Some couples also opt for some entertaining activities and games to indulge all the guests into the celebration. Trust us, it is a great opportunity for all the family members to get acquainted with each other. 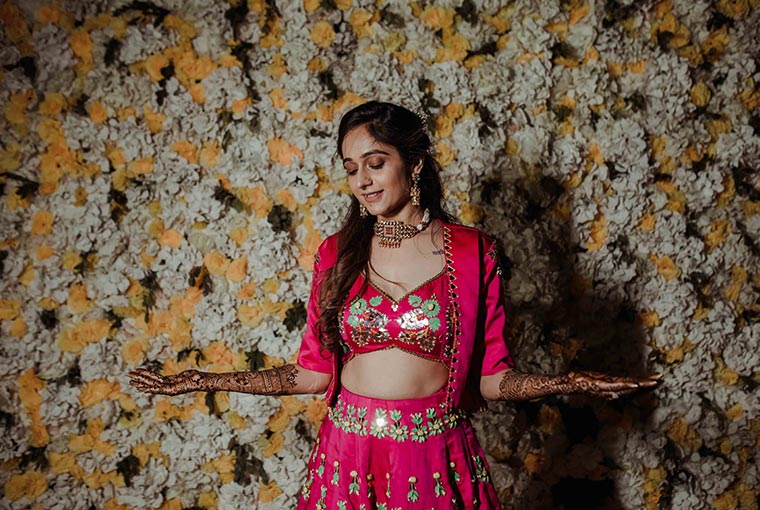 Mehendi a vital part of all the Indian weddings and every quintessential Indian bride loves to have a colourful mehndi ceremony with all the stunning decorations which makes it an unmissable part of wedding functions. The bride applies stunning henna motifs on her hands and feet which adds beauty to her bridal look. Not only the bride, but all the women and girls present at the function get mehendi on their hands. This function is celebrated separately at the groom’s and bride’s houses, with their own set of guests. Nowadays the henna designs are very intricate and elaborate, and it even has the groom’s initials are hidden amidst the various patterns which make it more personalised. In Punjabi households, this ceremony also happens at the groom’s place where a very simple henna design is applied to the groom’s palms as well. The traditional Punjabi wedding songs are sung throughout the ceremony. 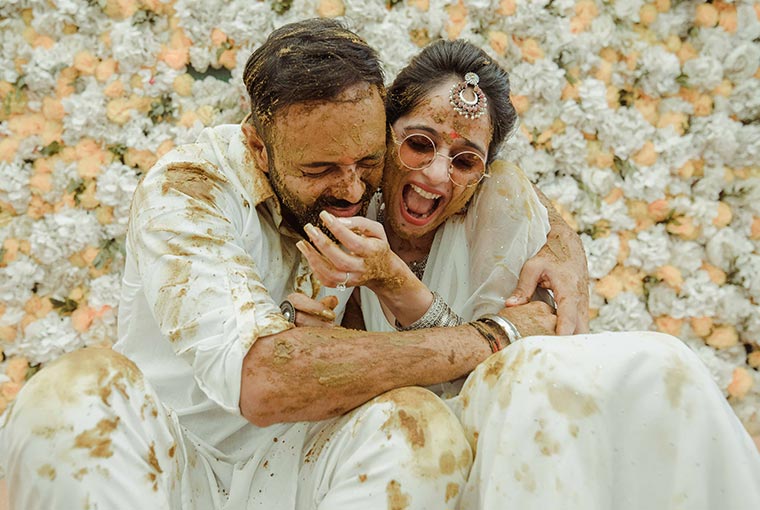 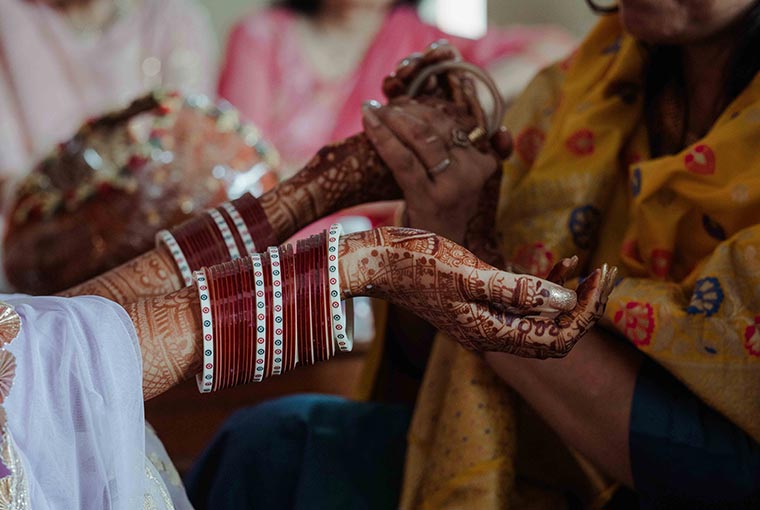 Punjabi girls are very much excited for getting that chooda on their wrists on their wedding day! This ceremony takes place on the wedding day in the morning accompanied by a havan. All the bride’s family take part in this ceremony and bride’s maternal uncle and his wife make the bride-to-be wear a set of 21 bangles which is the chooda which is mostly red and white in colour. That set of chooda is dipped in milk water first to purify it and the bride is not allowed to look at it as it is considered a bad omen. The chooda is even covered with a white cloth, so that the bride doesn’t see them. There is a belief that seeing the bangles, before the wedding begins may incur bad luck. A Punjabi bride needs to adorn that chooda for a minimum of 40 days after the wedding. After chooda ceremony, the bride’s sisters that denotes, well-being, happy conjugal life as well as fertility and top of it they look so beautiful with the bridal attire. After that, the shakes them over the head of an unmarried girl, who she wishes to see married next. If some of it falls over someone’s head, then it is believed that person would be the next in line to tie the knot! 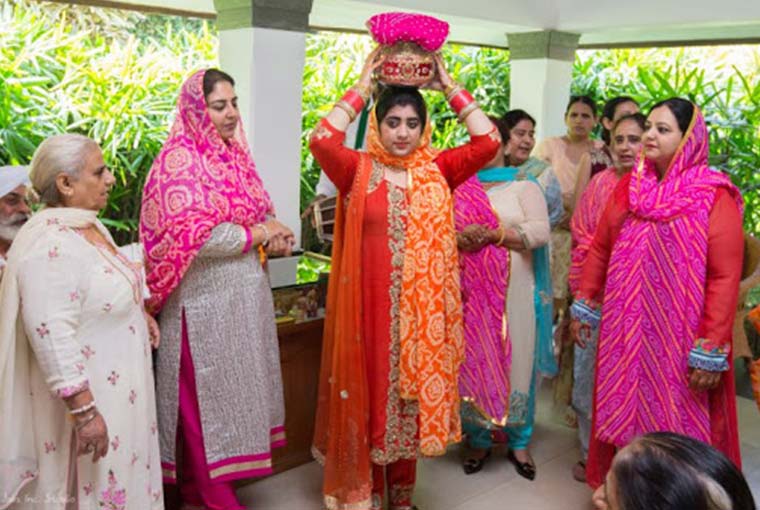 Ghadoli ceremony takes place after the haldi and chooda ceremony. The bride and groom’s sister-in-law with all the family members visit the nearby temple or gurdwara to fill a pitcher with water for the bride and groom’s to take a bath with it before the wedding. This ghadoli possession is taken with great pomp and show as all the family members dance on the tunes of dhol that makes this ceremony really entertaining. The mother of the bride or the groom then welcomes the sister in law with sweets and cash the moment they come back home with the water. 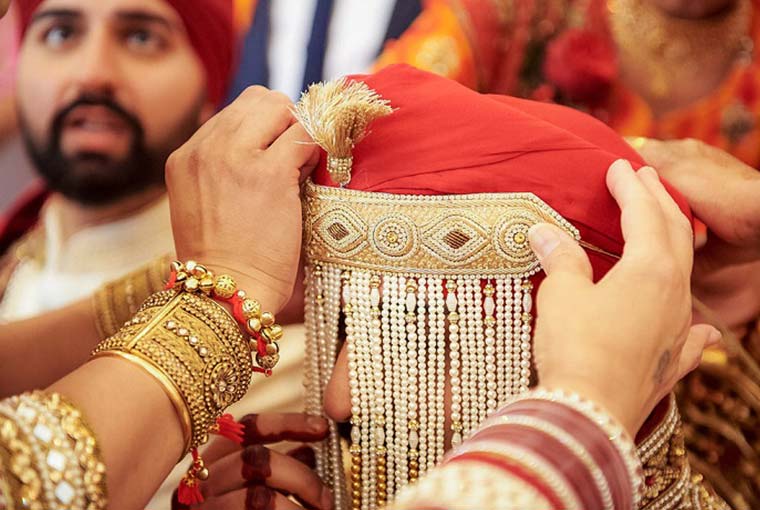 This ceremony happens before the groom’s baraat leaves for the venue. A sehra is a must for the Punjabi groom. After getting all dressed up, the performs a small Puja with a priest and all the present family members. The groom’s sisters then tie a Sehra to the groom’s turban. A sehra is a basic face cover made out of pearl strings combined together. After that 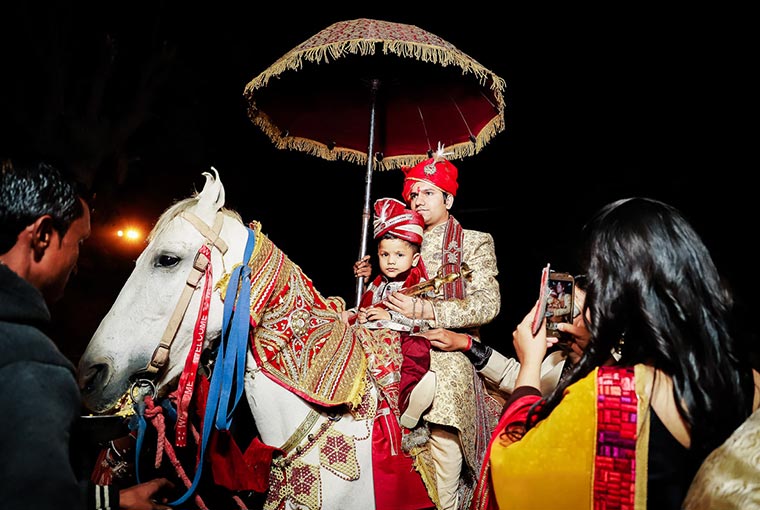 After Sehra Bandi and pooja, the groom is all set for his baraat to take off. Traditionally they have to sit upon a female horse to go towards his bride. This is the most exciting part for the groom’s side as everyone dances with the baraat with dhol and band which looks no less than a festivity! Waagh bandhai is a ceremony done by the groom’s sisters adorn the ghodi with golden threads and in return they also get cash. 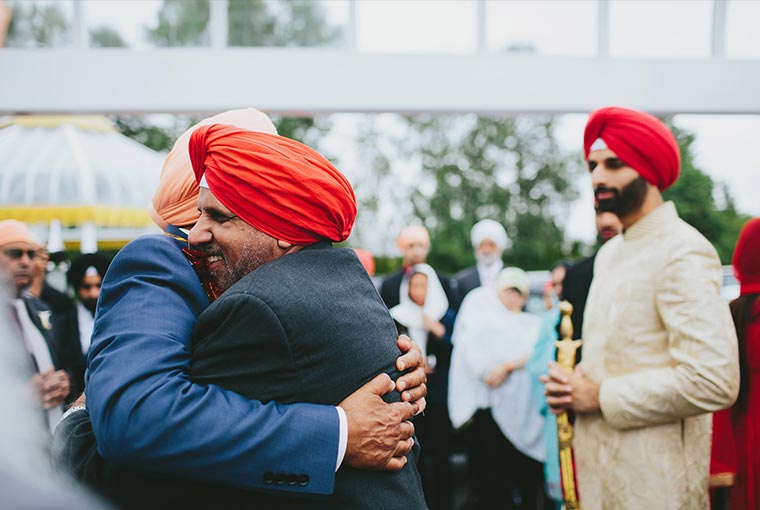 Upon the arrival of the Barat at the venue, the bride’s entire family stands at the gate to welcome the Barat. Then the two families meet and greet each other with lots of love and hugs which is known as Milni. All the male members from both sides perform the milni. 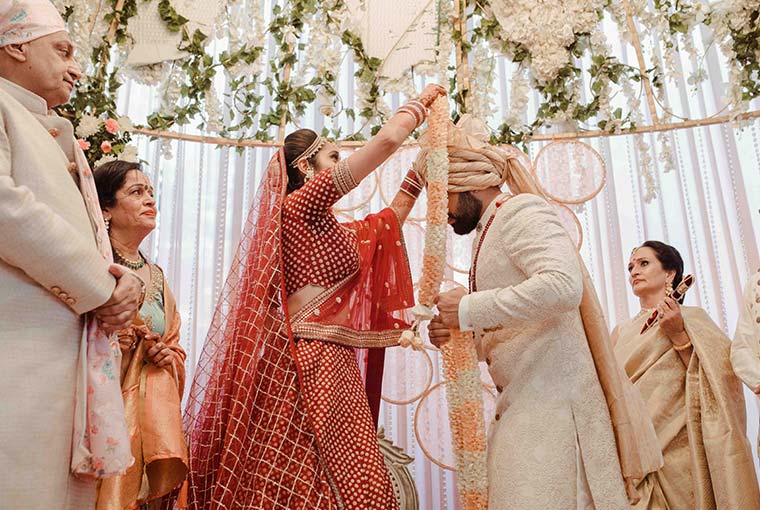 This is the most common wedding ritual that happens at every Indian wedding be it Punjabi, Bengali or even South Indian. In this ceremony, the bride and the groom exchange the garlands called Jaimala. This is basically the first ritual of the upcoming wedding ceremony. 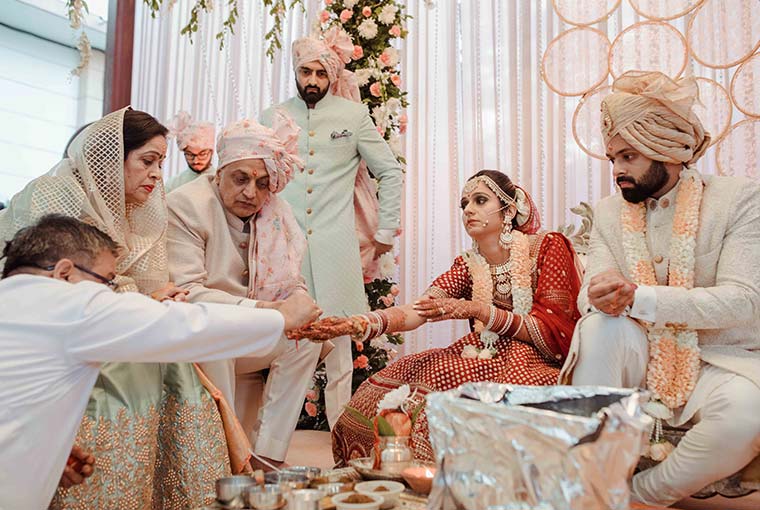 Kanyadan is the most important and sentimental rituals of the wedding ceremony. In this, the father, as well as the mother of the bride, gives away his daughter to the groom. As per the Vedic traditions, this ceremony is considered to be the biggest achievement of a father as it’s the biggest ‘Daan’ the parents can ever do. 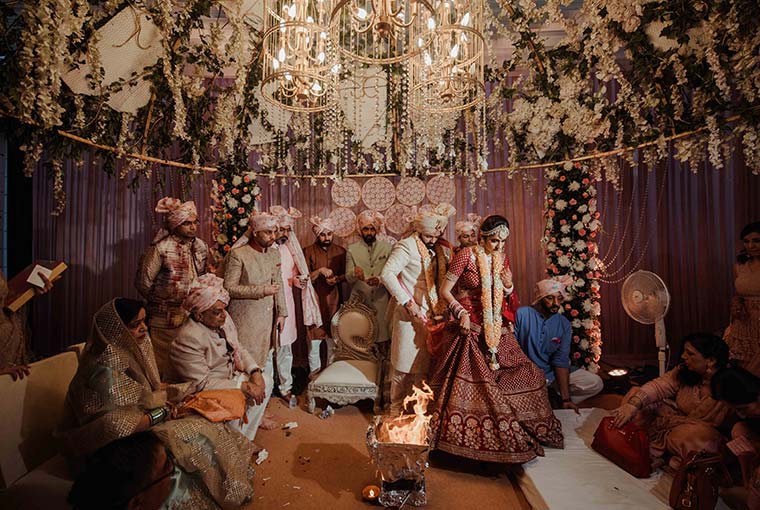 In this ceremony, the couple has to circle around the sacred fire seven times in front of the family. In the first three rounds, the bride leads from the front and for the remaining four, the groom leads. Every round is symbolic and has some meaning to it. While these rounds the priest also recites mantras. The priest declares them married after these pheras and after that, the ceremony is completed with the magalsutra and sindoor daan. 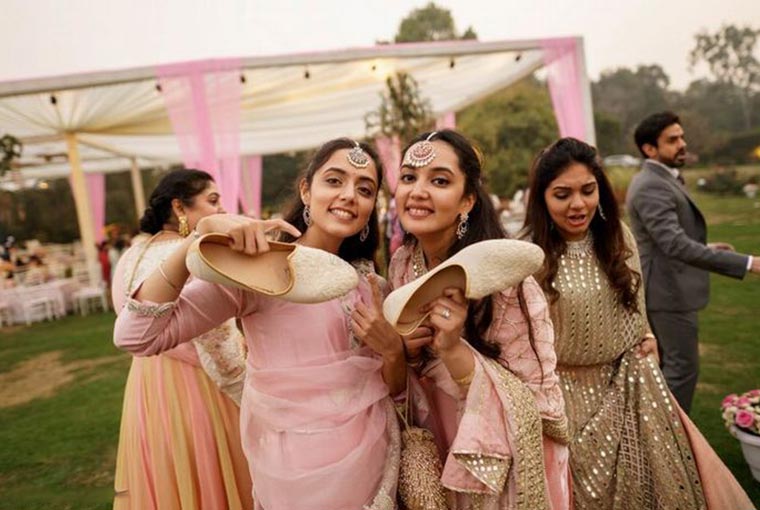 This is the most fun part after the wedding. While the couple and groom’s family is busy with the rituals, the bridesmaids hide the groom’s shoes. They return them in exchange for money or gifts. 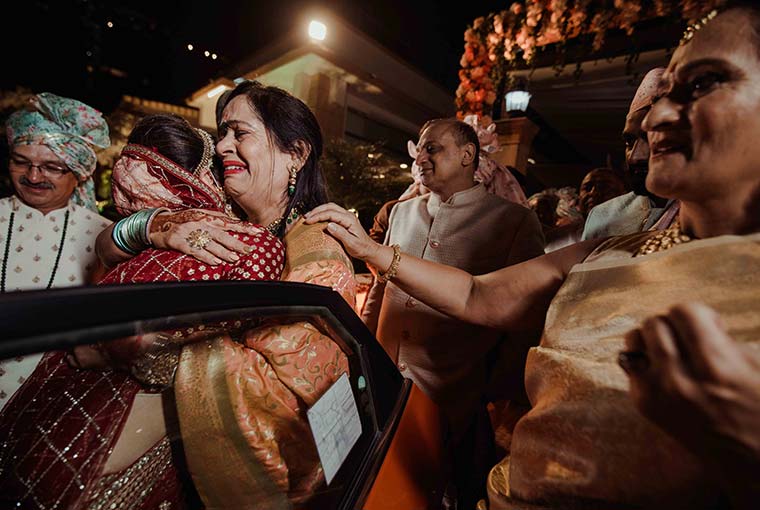 After all the rituals, the bride bids goodbye to her maternal home and family. It’s an emotional moment and she leaves her home and she throws a handful of puffed rice and prays that her parents and her home always prosper even after she leaves her.

So after reading all this, how excited are you attend a Punjabi wedding? Do tell us in the comments below…

ALSO READ: What are the Bengali Wedding Rituals?